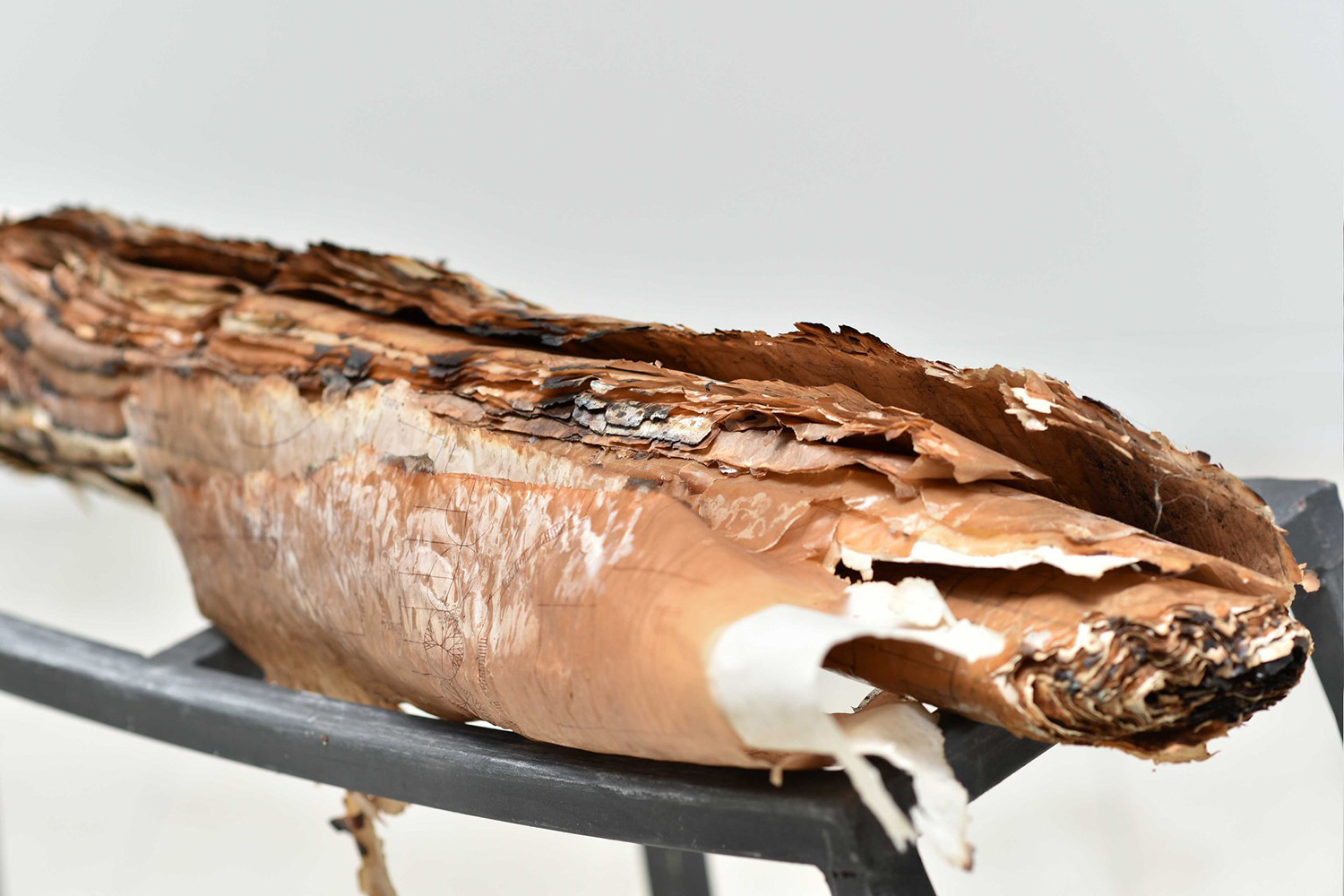 “Undisciplined: A Construction of an Archive”, text by Yane Calovski

Every time we experience the loss of something associated with our collective history, be it a document, a building, or a person, we feel that we lose our footing in both the present and the future. A disconcerting, disorienting, and ultimately debilitating sensation. Moreover, the ideology of remembering and archiving is strongly felt also in the absence of an actual archive (for instance, when it has been destroyed), which contributes to making all acts of artistic production around the archival challenging.

One key question emerging in my artistic research is how to use fragmentation, discontinuity, and contingency as tools for recontextualising knowledge from an archive. My work often follows formal elements conspire along the lines of creating a dimensional system of purely visual and conceptual entities that can become politically engaging and socially relevant. A visual work or a book based on archival sources is not just an exercise of thought but also constitutes a new physical and thus political reality. Undisciplined: A Construction of an Archive (2017–ongoing) undertakes to rearchive the voluminous technical and photographic documentation of the master plan for Skopje by Japanese architect Kenzo Tange, administered by a special UN fund from 1963 (when the city was devastated by an earthquake) until 1967. My project was triggered by another calamity: the fire that destroyed Skopje’s former Institute for Urban Planning and Architecture in April 2017. Located in a barracks from the 1960s, the institute housed an archive of the post-earthquake reconstruction of Skopje. In May 2017 I initiated a civil action (led by Press to Exit and supported by numerous individuals and state and independent organizations in the fields of art, architecture, and culture) to retrieve the documentation scattered on the ground where the Institute was located. Following our intervention into the devastated field, a time-consuming process of cleaning, selecting, and archiving has to lead to the resuscitation of the material.

The goal of Undisciplined: A Construction of an Archive is to underline the multilayered social production in constituting a new form of built and lived archives, via theoretical and creative analysis. A conceptual elasticity in converging the legacy of modernity, the notion of performativity, and the usage of archives, while addressing current sociocultural, economic, and political conditions, has been central to my artistic practice. I have addressed the systematic neglect of the archive of the urban plan for Skopje via previous works, Master Plan (2008), Obsessive Setting (2010), and most recently Former City (2017). This ongoing interest incorporates many of the key concepts I care to address, such as occupation, eviction, reorganization, adaptation, and attribution of ideas within a cultural, economic, and political premise. As already indicated in the title, the objective of the current work is to use a nontraditional methodology for setting up an archive in the public domain. The ultimate goal is to develop a dispersive concept of an archive with the participation of public institutions and private citizens, and delineate a cross-disciplinary methodology to generate social, political, and cultural currency surrounding modernist cultural heritage. Theoretically, this work is informed by Polish architect Oskar Hansen’s concept of “Open Form,” in which the possibility of inconclusiveness (in turn activating values such as nondogmatism and democracy) continually creates the possibility of extended context, relationships, and interpretation, and also by Foucault’s articulation of archives and the notions of the author and work. We are now trying to define the archive as a meaningful process of accommodation and dissemination of new knowledge that can incorporate new and open channels of reworking distribution through its connectivity, immediacy, and instantaneousness.

Within the research context of the three-way international partnership project Collective Domain of Cultural Memory, we curated a program further exploring the concept of the dispersive, a proposition where collectively we can propose a transformation of the scattered modernist architectural legacy back into the public domain. In close collaboration with individuals, as well as with state and independent institutions, we envisioned that (Un)disciplined can be viewed as an experiment with the archive as a metaphor, research question, and methodology. The specific Macedonian context has allowed us to look at how political opportunism echoes into and affects our ability to manifest a critical position that would have consequences in the public realm, using both theoretical and practice-based research. We discovered that ultimately we all need to work together and in solidarity, defining new and progressive citizen strategies of taking responsibility for the collective cultural heritage and the future of collective memory. So far, by working side by side with former staff at the Institute, the State Archive, and other professionals, we have been able to locate important analog items that could potentially find a place in the collection. It is a slow and painstaking process that makes us ask why it is important to collect and protect this demarcated analog data, who will use it, and to what extent it will be useful in the future.

To conclude, I would like to reference sociologist and political theorist Raymond Williams, who defines the “residual” as something that “has been effectively formed in the past, but is still active in the cultural process, not only and often not at all, as an element of the past, but as an effective element of the present.”1 The residual is evident everywhere around us. Not caring is no longer an option. In the present reality we have to reconstitute our commitment to social ecology and sustainability, and in that sense we have to preserve knowledge from disappearing. In that regard the project can be seen as an invitation to public institutions, independent organizations, and citizens to join in an effort to address the importance of this and other cultural heritage in order to better understand our collective identity, our idea of community, and our sociopolitical progress. And ultimately, delineating the temporality of situations in which things are constructed and shaped by their meaning, formally and theoretically, will become an added value in terms of the question of archiving and/or adjusting knowledge outside of the institution and into the public realm.